So its been a while since I posted. But thought it would be good to finally add the 2nd part of this, where this time we will look at how to create and push to Azure DevOps hosted Nuget feeds.

The 1st step is to create a new Azure Devops project, and from there you will need to go into the newly created project, and turn on the following

Once you have done that you can grab the repos remote clone details. So for a new project this may be something like this

So for me I then cloned the repo, and created a simple .NET Standard 2.0 library, that simply adds numbers

From there I simply pushed up the code to the remote repo.

So all good so far, we should have a new project which supports feeds and has our new code in it. Lets carry on

So now that we have some code pushed up. How do we make it available on our own hosted Nuget feed. There are a couple of steps to perform here

Firstly we need to create a new Feed, which is done by going into the artifacts menu, and clicking the “Create Feed” button

You need to give the feed a name, lets suppose I chose “foofeed2” as the name, you should see something like this, where you will now need to go into the feed settings

If you click on the drop down you should see that the feed is created as “project scoped”, which means that it  belongs to the project. Until very recently this was not the case and all new feeds used to be scoped at organizational level, which effects how the build definition works. This was bug in Azure Devops. Which you can read more about in this StackOverflow which I created https://stackoverflow.com/questions/58856604/azure-devops-publish-nuget-to-hosted-feed

This was quite a weird bug to have but it did mean that all of a sudden for any Nuget feed you created and tried to publish it would not work. This is now fixed, and I will explain the difference between pushing to a project based NuGet feed and an Organizational one later when we discuss the build definition

For now you should make sure that the permissions for your need look something like this. Please forgive me but I am using a screen shot here from my actual project, where above I am just showing you what a new project will look like 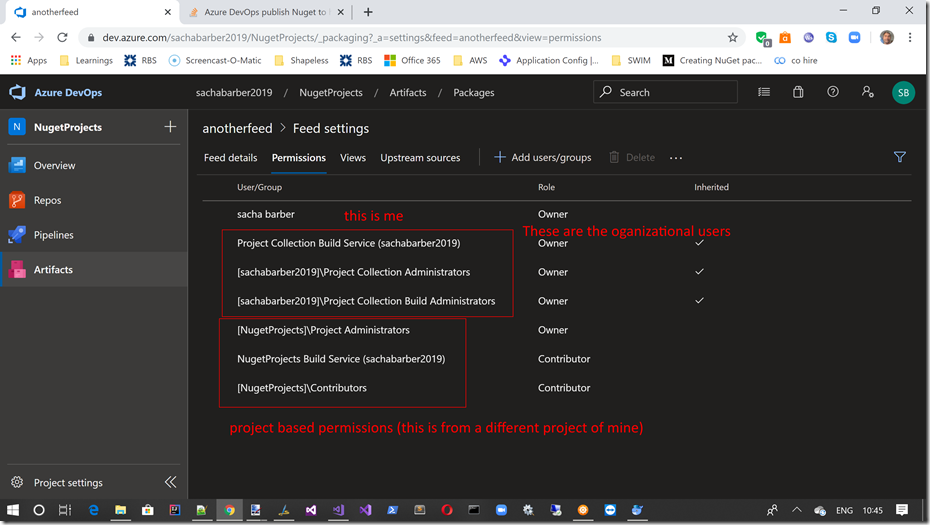 I really do urge you to read the StackOverflow page as there is some really valuable discussions in there about scoping, and what extra permissions you need to ensure are there

So once we have the feed set up with the correct permissions, we can focus our attention to the build side of things.

It should be noted that this is using a “project scoped” nuget feed. See these entries ‘nugetprojects/anotherfeed’ that is the syntax you need to use when using project scoped Nuget feeds.

In contrast to that, if you use an organizational feed you will need to ensure you use feed settings in the YAML above that just have the name of your feed so the push step would be this instead

As I say this was a VERY recent changed introduced in Azure Devops, and you can read more in the StackOverflow post that I refer to above

Consuming the feed from a new project

With all this in place we should now be able to consume the feed from a new project, so lets see how we can so that. We can go to the feed to grab how to connect to it

Then pick the VisualStudio settings (or Nuget if you want to use nuget.config to configure your sources)

I’ll use VisualStudio one 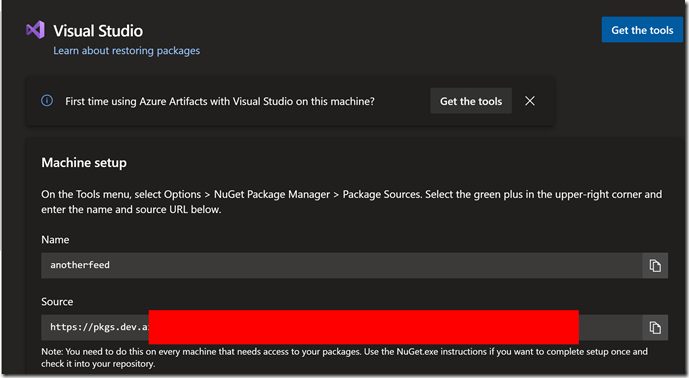 Cool all working. So that’s it for this time